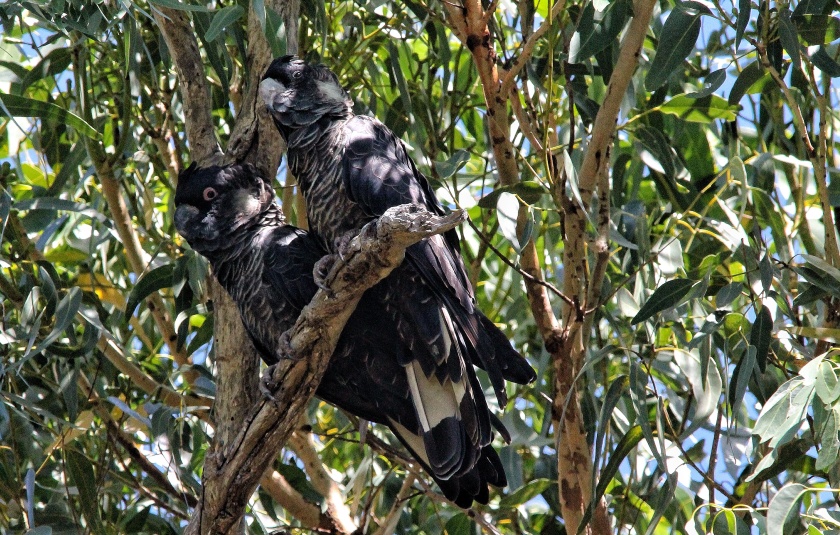 The short-billed black or Carnaby’s cockatoo (Calyptorhynchus latirostris) is one of Western Australia’s most fascinating birds. In summertime they reside in coastal areas while feeding on the seeds of Banksia, Hakea, and eucalypts – and with ample water and roosting sites Yanchep National Park is a favourite hangout and excellent place to spot them. Last Sunday we weren’t short of luck with flocks of up to a hundred individuals socialising in the tall Tuart trees. Here we witnessed a noisy spectacle of feeding, crooning and preening – the meticulous grooming ritual in which pairs strengthen their bond. Preening is the earliest sign of the approaching breeding season when the female will lead her partner back to the place where she was born, deep in the arid inland of WA’s Wheatbelt region. The arrival of the first storms and winter rains will be the starting sign of this journey, and the early settlers therefore called them ‘rain birds’, referring to the change of weather and seasons when the cockatoos flew over.

However, the future of the Carnaby’s cockatoo looks grim. Shortages of nest hollows due to competition from other cockatoo species and feral European honey bees, large-scale land clearing and destructive bush-fires have made breeding real estate scarce. Only 1 in 10 pairs will raise a chick successfully each year and the population is therefore declining rapidly – something that is hard to believe when witnessing the huge flocks over the weekend! Fortunately scientists, conservationist (WWF-Australia) and the Department of Parks and Wildlife are working hard on recovery plans while increasing public awareness should help these beautiful birds to survive.