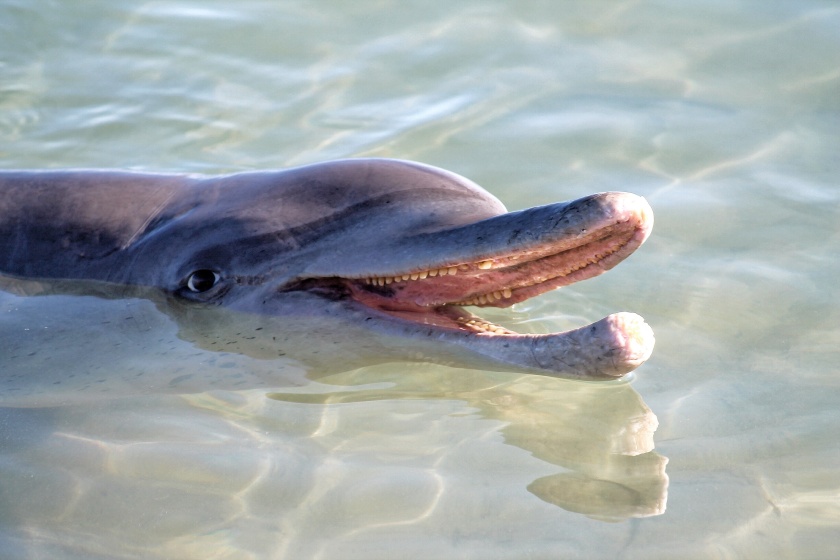 When international dolphin research started in Western Australia’s Shark Bay in 1982, female Bottlenose Dolphin (Tursiops aduncus) Puck would never have believed she’d become a true film star – but she did. Just before we left for a trip to this remote World Heritage area 850 kms north of Perth, we watched the 2009 BBC Documentary ‘The Dolphins of Shark Bay’. This documentary follows a family called ‘The Beachies’, named after their regular fishing expeditions in the shallow waters of Monkey Mia. As other dolphin families living in the vast Shark Bay area The Beachies form a tightly knit group led by adult females; matriarch Puck and her daughters Piccolo and Kiya. Together with their offspring they regularly visit the beach of Monkey Mia to hunt or to receive fish from Department of Parks and Wildlife rangers – the perfect chance to meet those big brained mammals up-close and personal!

Interaction between humans and dolphins in Monkey Mia goes back long time. Aboriginal fishermen would use dolphins to chase fish close to the shore and share their catch with them as a reward. In the 1960’s and 70’s commercial fishermen continued to hand out fish to dolphins – a practice soon to be adopted by the numerous tourists that started to visit Monkey Mia after the area received more publicity in the 1980’s. However, research showed an alarming mortality amongst calves and newborns when the feeding increased – adult dolphins will neglect their offspring when they constantly beg for fish in the shallows. Due to insufficient weaning, loss of hunting technique and lack of supervision young dolphins simply will starve or fall prey to the numerous Tiger Sharks patrolling these perilous waters. No wonder that the hand-out of fish is strictly regulated and supervised by DPaW nowadays. In fact, when large schools of fish are present the Beachies often prefer to chase them instead of entertaining the crowds with their smiles. As to further prevent unnecessary stress or spread of viruses, any physical interaction between humans and dolphins is also strictly forbidden – how would you react when a crowd would pet you continuously?

Nevertheless, due to the groundbreaking research we continue to broaden our understanding of the social living and intelligence of dolphins, resulting in better conservation measures and a fine balance between tourism and dolphins. We were therefore very grateful to be part of their world for a week that included nothing but highlights – numerous encounters with Puck (pictured at the top), her latest calf Samu, Piccolo, Kiya, Shock, the photogenic Surprise (pictured above) and many, many more. For our daughter Zuza the hand-feeding of Surprise will certainly be a moment to remember.